Learn the simple steps on how to separate cream from raw milk. You will get to enjoy fresh cream in your coffee, homemade butter, homemade vanilla ice cream, and more.

We have been getting farm-fresh milk from local farmers for quite some time. One of the most significant benefits of getting fresh whole local milk is the cream I skim off the top.

How to Separate Cream from Raw Milk in a Jar

If you are new to non-homogenized milk, you may notice that there is a noticeable line where the milk separates after sitting in your fridge for a few hours.

That is a cream line, and the raw cream has settled at the top of the jar.

Sometimes, we shake the gallon of milk and enjoy the whole raw milk.

However, sometimes I want the cream for making butter, homemade whipping cream, or homemade ice cream.

So, here are several ways how to separate cream from raw milk.

What is Raw Milk with Cream

Raw milk is milk that has not been pasteurized or homogenized.

When milk is pasteurized, it undergoes a process of heating the milk to a high enough temperature so it kills healthy enzymes.

Milk is then homogenized, which is a process of breaking down the fat molecules, so they stay together and don’t separate as cream, and it gives the milk a smooth, even consistency.

Raw milk comes from pastured cows and has not undergone any processing. It contains all of the fats.

There is some controversy surrounding raw milk, which is even illegal in some areas.

However, I can’t drink store-bought milk without it making me sick, but I can consume raw farm-fresh dairy.

Are you interested in finding your source of raw milk? You can look here for a location near you.

Step 1: Wait for the Cream to Rise

During the transport of the milk from the farmer back to your home, the milk can get shaken up and mixed with the cream.

Once you get your jars of milk home, put them in the fridge and wait for the cream to rise to the top.

Waiting for the cream to rise to the top can take about 24 hours. When I pick our milk up, it already shows the cream line.

However, I still allow the milk to sit in the fridge before I start to skim the cream off the top.

Step 2: Remove the Cream from the Milk

I have found the best way is to use a measuring cup to remove the cream as it is something I always have within easy reach.

A 1/4 cup generally fits the best inside my half-gallon jars. Search for the cream line on the jar so you know how far down the cream is located.

Be careful not to go very deep because you don’t want to get down into the milk. I always leave some cream on top of the milk because it makes the milk taste even more delicious!

Scoop the cream out and place it into a separate jar. Keep repeating until you have the amount you wish to take off the top.

Step 3: Store the Cream in a Separate Jar

Place a lid on the cream jar and store it in the fridge.

It is essential to handle raw milk safely. If you get it from a local farmer, know your farmer.

You should know they are safely handling your raw cow milk. You should see if they are careful to keep their equipment clean and sanitary.

I own two sets of these half-gallon mason jars and have them labeled with our last name.

I take one empty set to the farmer’s house each week and leave them. Then, I pick up the set I left there the previous week.

After using a half-gallon of milk, the jar is washed and placed back into the box for next week’s milk pickup time.

Raw milk should always be kept cold, and I suggest storing it in the back of the refrigerator.

Our cream is stored in a separate container, usually quart jars, and kept towards the back of the fridge.

While I often use a measuring cup to separate the cream from the milk, there are several ways to complete the task.

Using the spigot jar method allows you to use the milk first, and then eventually, all that is left is the cream.

To use this method, pour your milk into the glass jar and let the heavy cream settle on the top.

Generally, 24 hours will be enough time. To get the milk, open the spigot. Eventually, all that will be left in the jar is the cream.

I have never tried this method as I always need the cream off the top before my family can finish a gallon of milk.

The other is that it would be hard to get it clean enough. It is vital to ensure everything stays clean when working with raw dairy.

The ladle method is the same process as using a measuring cup. Dip the ladle into the cream and scoop it out.

The benefit of the ladle is that it has a longer handle than a measuring cup.

A large turkey baster works well to remove the cream layer. Squeeze the bulb and insert it into the layer of cream, then release the bulb to draw it up.

Once the bulb has fully re-inflated, the baster is full. Gently squeeze the baster and fill a separate container with the heavy cream.

Repeat until about an inch of cream is left to avoid pulling off too much milk.

How to Use Fresh Raw Cream

So, you have the cream. Now, what do you do with it?

There are so many things you can do with cream! Having it for my morning coffee is an essential part of my day.

Now that you know how to separate cream from raw milk, here are some delicious recipes that use heavy cream.

47 thoughts on “How to Separate Cream from Raw Milk” 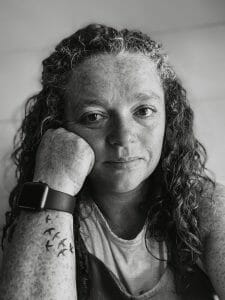 Some links on this site are affiliate links. This means that I could possibly earn a commission from purchases you make after clicking on them. Products linked are things that I have or would purchase. I may get paid for some of the content on this site. All opinions remain my own.
2249 shares