After a very long two year wait, the day of moving our double wide mobile home finally happened. Here is a look at how the day progressed from the very start until the very end.

We bought our farm exactly two years ago in October of 2017. We knew from the moment we bought the farm that we would be moving our double wide mobile home to this location. It was a short move, 4 blocks down and 2 blocks over, but what a drastic change it would be. From living on two small lots in town to living on 5 acres. There was no doubt that we would love our new location with the large barn, big trees, and space for the children to run and play.

We began preparing for the move two years ago by doing a lot of land clearing, building our raised garden beds, adding our honeybees and adding the chickens with their coop. While many things were already on the farm, the only thing missing was our home. Until October 03, 2019 when our double wide mobile home was moved to its forever location.

I went to bed October 2, barely being able to sleep. There was rain in the forecast the day we set to move, and I went to bed praying that the rain would hold off. When I awoke on move day, the rain was gone from the forecast and we were to have a day of cloudy yet cool weather.

How Much Does it Cost to Move a Mobile Home?

Because, there are so many variables in moving a home, I cannot give an exact quote on how much it might cost to move a mobile home in your area. To find a mover, I called various mobile home lots and got names and numbers of mobile home movers. We chose Stout Mobile Home Transport to move our home.

Moving our double wide mobile home, we got estimates that ranged from $5000-$8000. Then, there was the cost of having the concrete work done for the home to sit on. We chose to do concrete runners and that cost came in at $3500. You can read that process on my post, site preparation for our manufactured home.

There will be lot of photos in this post as well as a video to show what the process looked like for moving our double wide mobile home. However, I will not be going into great detail about the process because again, it will be different depending on individual situations and movers.

What it Looks Like to Move a Mobile Home

Before the movers arrived, my husband unhooked the sewer, water, and electric lines. He had also already removed the skirting from around the home, as well as the siding from the ends of the home. That was the basics that he was able to care for, the rest was up to our movers.

There were several guys on the crew and all of them began the process of moving our home in different areas. One individual was on the roof preparing to separate the home at the top, while others were putting on the axils and tires or unbolting the middle section under the home. They worked quickly, and efficiently.

Once one section of the home was ready for removal from the property, the movers brought in a large machine to help with the separation process.  I do not know the name of the machine, but it worked to slowly separate the home and it also helped with balance as it moved up and down as well as back and forth.

It was a very slow process to maneuver one section of the home out of the current location and onto the road. As they moved the home, one of the guys would occasionally get out of the front of the truck to make sure there were no issues with tree limbs or electrical lines. At one point, a tree limb was removed to not cause damage to the home.

Moving the double wide mobile home down the road was a very slow process. The movers had to take the best route for the home, and they drove very slowly to get the first half to the farm. Once the first half was to the farm, they parked it just outside the fence on the side of the road. The was because they needed to go back, get the back half of the trailer and pull it in first.

Putting the Double Wide Mobile Home Back Together

Once the two sides of the home were both placed on the concrete runners, the movers placed the blocks under the home, leveled the home and began bolting it all back in place. The roof also needed to put together again and new shingles placed where the others had been removed.

All in all, it took about four hours from the start of the process to the time that the home was back together at the farm. The movers took a lunch break and then came back to finish up the final few things like checking inside to be sure that all the floors were level.

Will Moving a Mobile Home Cause Damage

My worst fears were that our shiplap walls or the hardwood floors could be damaged, cracked or broken in the move. However, nothing was damaged! We chose to remove a lot of the heavier furniture from the home but left quite a few other things inside. From what we could tell, not one thing even moved or shifted during the moving process. It was quite unbelievable!

Again, ever home situation will be different and damage caused by moving a home may vary. However, I am so thankful that ours arrived in the same condition as before the move.

It is hard to put into words what it feels like to see your home split in half and going down the road, but our family is so appreciative of the movers. They worked efficiently and were experts at their job. It is nice waking up in a new location, surrounded by the sounds of nature and the site of trees.

As for the rest of the work, my husband and I will be completing the skirting and siding. It was very hectic for a few days, moving back in and settling in place. But, after two weeks we finally feel settled and are so grateful for our home to be on the farm.

Now the work begins as we start the remodeling process again. The exterior of the home is complete, but there is much to do on the inside!

Thanks for following along on our journey. I know it has been a very long two year wait, but it was worth it. Please take a moment to sign up for my newsletter to stay up to date with all the happenings here at Rocky Hedge Farm. 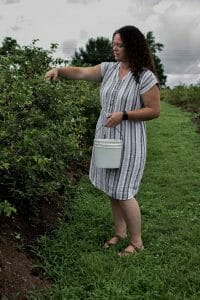 Some links on this site are affiliate links. This means that I could possibly earn a commission from purchases you make after clicking on them. Products linked are things that I have or would purchase. I may get paid for some of the content on this site. All opinions remain my own.
117 shares